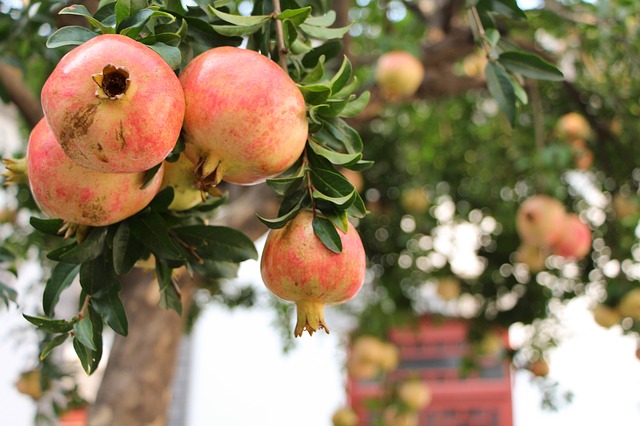 The fall harvest is about to begin and the first crop of the season is the antioxidant-packed pomegranate. Soon the fruits will turn a brilliant red, so keep your baskets ready and harvest while you can. This ancient fruit is mentioned in the Old Testament and is a symbol of fertility, abundance, prosperity, bounty and eternal life in many cultures. Pomegranate is derived from the French word “pomme garnete” meaning “seeded apple.”
Pomegranate seeds are the little red ruby burst of tart and sweet deliciousness that pack a big punch of health benefits. They are among the top 10 Bible foods that heal your body and mind.
Pomegranate Nutrition
These fruits are rich in Vitamin C, Vitamin K, folate, choline, fiber, omega 6 fatty acids, calcium, magnesium, phosphorous and potassium. They are hydrating because of their high water content and keeps your skin soft and supple.

Pomegranates are a superfood that counteracts aging. If you’re unwilling to surrender your youth to the passage of time, then include pomegranates in your diet.  As we age our cells struggle to recycle their powerhouses called the mitochondria. These mitochondria accumulate in the cells and bring about several age-related diseases, including Parkinson’s.
A team of scientists from Ecole Polytechnique Fédérale de Lausanne found that a molecule in pomegranates, transformed by microbes in the gut called urolithin A, re-establishes the cells ability to recycle the components of the defective mitochondria. Simply put, it re-launches the mitochondrial cleanup process. As a result, your lifespan is increased.

Breast cancer: Several research studies show pomegranate extracts inhibit the proliferation of breast cancer cells and activate the programmed cell death of these cancer cells. Fermented Pomegranate juice and pomegranate seed oil were more effective in fighting against breast cancer.
Pomegranate extracts fight other types of cancers such as prostate, lung, colon, and skin. A word of caution, according to University of Maryland Medical Center pomegranate may interfere with cancer medications, making them less efficient.
Boosts Heart Health
The leading cause of death in the US is heart disease. It also results in cognitive decline. The polyphenols (plant-based molecules) present in pomegranates have high antioxidant properties. They play a significant role in protecting your heart.
High blood pressure can severely affect your heart health. Researchers found that drinking pomegranate juice for four weeks reduced blood pressure and significantly reduced the thickness of plaques, which are a primary cause of heart attacks.
Pomegranate juice reduces oxidation of bad cholesterol (LDL), some scientists believe oxidation of LDL causes plaque to build up in arteries. Stopping the damage optimizes your heart health.
Pomegranate juice and delicious toffee-like dates are a winning combination in the war against heart disease. Just half a glass of pomegranate juice along with the handful of dates can do wonders for your heart.

The antioxidant and free radical scavenging action of the polyphenols found in pomegranates sharpen your mind. A study of elderly individuals found that drinking eight ounces of pomegranate juice for four weeks had significantly improved markers of visual and verbal memory.
Researchers at Loma Linda University have found that pomegranates have excellent neuroprotective properties. If you include them in your diet, you can delay the onset or progression of Alzheimer’s disease.

Osteoarthritis occurs when the cartilage in the joint wears down and causes pain and stiffness. The flavonols in the pomegranate block the inflammation that causes the destruction of cartilage. Animal studies indicate that pomegranates may reduce the onset and incidence of collagen-induced arthritis. The severity of arthritis and joint inflammation are significantly reduced by including pomegranates in your diet.
However, if you’re already taking medications for arthritis, consult your doctor before including pomegranate products in your diet.

Pomegranates can cause dangerous side effects when it interacts with prescription medicines. If you are on any medication, have a word with your doctor before you include pomegranate products in your diet. For ordinary folks, pomegranate can be a healthy addition to your diet to optimize your overall health quotient.

View all of Swarnambal John's posts.

As an Amazon Associate, I earn from qualifying purchases.